By name Mehmed Fatih (Turkish: Fatih Sultan Mehmet – English: Mehmed the Conqueror) (b. March 30, 1432, Adrianople, Thrace, Ottoman Empire- D. May 3, 1481, Hunkarcayiri, near Maltepe, near Constantinople), Ottoman sultan from 1444 to 1446 and from 1451 to 1481. A great military leader, he captured Constantinople and conquered the territories in Anatolia and the Balkans that comprised the Ottoman Empire’s heartland for the next four centuries.

Fatih Sultan Mehmet was the fourth son of Murad II of a slave girl; at the age of 12, he was sent, as tradition required, to Manisa (Magnesia) with his two tutors. The same year, his father set him on the throne at Edirne and abdicated. During his first reign (August 1444-May 1446), Fatih Sultan Mehmet had to face grave external and internal crises. The King of Hungary, the Pope, the Byzantine Empire, and Venice – all eager to take advantage of the accession of a child to the Ottoman throne – succeeded in organizing a crusade. Edirne was the scene of violent rivalry between the powerful Grand Vizier Candarli Halil, on the one hand, and the viziers Zaganos and Sihabeddin, on the other, who claimed that they were protecting the rights of the child sultan. In September 1444 the army of the crusaders crossed the Danube. In Edirne, this news triggered a massacre of the Christian-influenced Hurufi sect and conjured up an atmosphere of panic and arson. When the crusaders laid siege to Varna, the reigning sultan’s father was urged to come back from retirement in Bursa and lead the army. The Ottoman victory at Varna under Murad II (Nov. 10, 1444) put an end to the crises. Mehmed II, who had stayed in Edirne, maintained the throne, and after the battle, his father retired to Manisa. Zaganos and Sihabeddin then began to incite the child sultan to undertake the capture of Constantinople, but Candarli engineered a revolt of the Janissaries and called Murad II back to Edirne to resume the throne (May 1446). Mehmed was sent once more to Manisa with Zaganos and Sihabeddin, newly appointed as his tutors. There Fatih Sultan Mehmet continued to consider himself the legal sultan.

On his father’s death, Fatih Sultan Mehmet ascended the throne for the second time in Edirne (Feb. 18, 1451). His mind was filled with the idea of the capture of Constantinople. Europe and Byzantium, remembering his former reign, were then not concerned much about his plans. Neither was his authority firmly established within the empire. But he was not long in showing his stature by severely punishing the Janissaries who had dared to threaten him over the delay of the customary gift of accession. Yet he reinforced this military organization, which was destined to be the instrument of his future conquests. He devoted the utmost care to all the necessary diplomatic and military preparations for the capture of Constantinople. To keep Venice and Hungary neutral, he signed peace treaties favorable to them. He spent the year 1452 mainly in building the fortress of Bogazkesen (later Rumeli Hisari) for the control of the Bosporus, in building a fleet of 31 galleys, and in casting new cannon of large caliber. He made the Hungarian master gunsmith, Urban, cast guns of a size unknown as yet even in Europe. Meanwhile, the Grand Vizier Candarli argued against the enterprise and during the siege of Constantinople (April 6-May 29, 1453), the opposing views were voiced in two war councils convened at critical moments. Zaganos vehemently rejected the proposal to raise the siege. He was given the task of preparing the last great assault. The commander in chief, Mehmed II himself, on the day of the attack personally directed the operations against the breach opened in the city wall by his cannon. The day after the capture of the city, Candarli was arrested and soon afterward was executed in Edirne. He was replaced by Zaganos, who had become Mehmed’s father-in-law. Fatih Sultan Mehmet had had to consent to a three-day sack of the city, but, before the evening of the first day after its capture, he countermanded his order. Entering the city at the head of a procession, he went straight to Hagia Sophia and converted it into a mosque. Afterward, he established charitable foundations and provided 14,000 gold ducats per annum for the upkeep and service of the mosque. 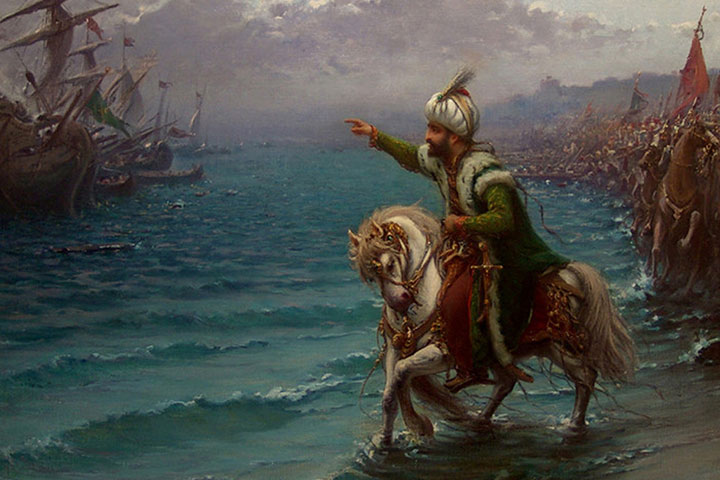 One of the tasks on which Mehmed II set his heart was the restoration of the city, now popularly called Istanbul, as a worthy capital of a worldwide empire. To encourage the return of the Greeks and the Genoese of Galata (the trading quarter of the city), who had fled, he returned their houses and provided them with guarantees of safety. To repopulate the city, he deported Muslim and Christian groups in Anatolia and the Balkans and forced them to settle in Constantinople. He restored the Greek Orthodox Patriarchate (Jan. 6, 1454) and established a Jewish grand rabbi and an Armenian patriarch in the city. Also, he encouraged his viziers to found several Muslim institutions and commercial installations in the main districts of Constantinople. From these nuclei, the metropolis developed rapidly. According to a survey carried out in 1478, there were then in Constantinople and neighboring Galata 16,324 households and 3,927 shops. Fifty years later, Constantinople had become the largest city in Europe.

The capture of Constantinople bestowed on Mehmed The Conquerer’s incomparable glory and prestige and immense authority in his own country so that he began to look upon himself as the heir of the Roman Caesars and the champion of Islam in the holy war. It is not true that he had preconceived plans for his conquests, but he was certainly intent upon resurrecting the Eastern Roman Empire and upon extending it to its widest historic limits. 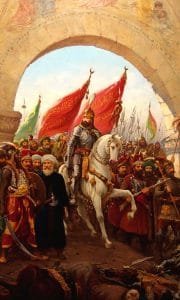 His victory over the Turkmen leader Uzun Hasan at the Battle of Bashkent in Erzincan (Aug. 11, 1473) marked in the life of Mehmed The Conquerer, a turning point as important as the capture of Constantinople, and it sealed his domination over Anatolia and the Balkans.

Mehmed The Conqueror had assumed the title of Kayser-i Rum (Roman Caesar) and, at the same time, described himself as “the lord of the two lands and the two seas” (i.e., Anatolia and the Balkans, the Aegean and the Black Sea), a designation that reflected his idea of the empire. During the quarter-century after the fall of Constantinople, he undertook a series of campaigns or expeditions in the Balkans, Hungary, Walachia, Moldavia, Anatolia, the island of Rhodes, and even as far as the Crimea and Otranto in southern Italy. This last enterprise (1480) indicated that he intended to invade Italy in a new attempt at founding a world empire. The following spring, having just begun a new campaign in Anatolia, he died 15½ miles (25 kilometers) from Constantinople. Gout, from which he had suffered for some time, in his last days had tortured him grievously, but, there are indications that he was poisoned.

During the autocrat’s last years, his relations with his eldest son Bayezid became very strained, as Bayezid did not always obey his orders. Mehmed’s financial measures resulted, toward the end of his reign, in widespread discontent throughout the country, especially when he distributed as military fiefs about 20,000 villages and farms that had previously belonged to pious foundations or the landed gentry. Thus, at his death, the malcontents placed Bayezid on the throne, discarding the Sultan’s favorite son, Cem (Jem), and initiated a reaction against the policies of Mehmed The Conquerer.

The conqueror reorganized the Ottoman government and, for the first time, codified the criminal law and the laws relating to his subjects in one code, whereas the constitution was elaborated in another, the two codes forming the nucleus of all subsequent legislation. In the utterly autocratic personality of the conqueror, the classical image of an Ottoman padishah (emperor) was born. He punished with the utmost severity those who resisted his decrees and laws, and even his Ottoman contemporaries considered him excessively hard. 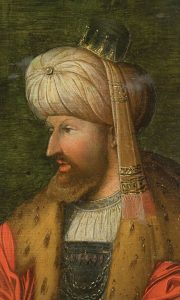 Nevertheless, Mehmed The Conqueror may be considered the most broad-minded and freethinking of the Ottoman sultans. After the fall of Constantinople, he gathered Italian Humanists and Greek scholars at his court; he caused the patriarch Gennadius II Scholarios to write a credo of the Christian faith and had it translated into Turkish; he collected in his palace a library of works in Greek and Latin. He called Gentile Bellini from Venice to decorate the walls of his palace with frescoes as well as to paint his portrait (now in the National Gallery, London). Around the grand mosque that he constructed, he erected eight colleges, which, for nearly a century, kept their rank as the highest teaching institutions of the Islamic sciences in the empire. At times, he assembled the ‘ulama`, or learned Muslim teachers, and caused them to discuss theological problems in his presence. In his reign, mathematics, astronomy, and Muslim theology reached their highest level among the Ottomans. And Mehmed The Conqueror himself left a divan (a collection of poems in the traditional style of classical Ottoman literature). (H.I.)