Whether you travel to Beykoz by boat down the Bosphorus or by road, the distinctive atmosphere of this outlying district of Istanbul strikes you immediately. You leave the crowded concrete city behind and find yourself enveloped by forest. Then you know you have arrived. It has been claimed that it was settled 2700 years ago, although by whom is uncertain. What is known is that during Roman times there was a votive altar at Anadolu Kavagi at the mouth of the Bosphorus. Here sailors heading into the Black Sea made sacrifices to Zeus and Poseidon for fair winds and stormless seas. The temperamental Black Sea was so feared that no seaman would think of entering its waters without calling upon divine assistance to ensure his safe return.

The Turks have felt a deep affection for this place ever since they captured the region around seven centuries ago. Ottoman sultans and statesmen built many hunting lodges and country houses in this beautiful area facing the Bosphorus Strait to the west and surrounded by woods.

The 17th-century Turkish writer Evliya Celebi describes at length the beauty of Tokat Garden, established here by Sultan Mehmed II in the 15th century in commemoration of the conquest of Tokat Castle. ‘This garden set in an extensive forest was surrounded by a fence, and here were kept game animals. There was a pavilion, a large pool, a fountain whose water spouted up to a gold bowl suspended from the dome, and a Hamam (Turkish Bath)’

One hundred gardeners were employed in Tokat Garden, which the 17th century Sultan Murad IV also loved to visit. On its lawns, he played cirit, an equestrian team game involving the tossing of javelins. The historian Inciciyan wrote in his book “Pages from Byzantium” that the area along the shore between Hunkar Iskelesi and Tokat Garden was as beautiful as paradise. He ascribed its beauty to Sultan Suleyman, who had built a cascade of four terraced pools that had later been neglected and fallen into ruin. These pleasure gardens were restored in 1746 by Sultan Mahmud I.

The many springs in Beykoz were a principal source of drinking water for Istanbul, the water being carried in boats down the Bosphorus. With so much water, it naturally possessed scores of fountains, most notably Ishak Aga Fountain, Anadolu Kavagi Iskele Fountain, and the Mahmud II Fountain from which still pours the water of Karakulak spring. The picturesque villages around it nestled in a sea of green. There is Mahmutsevket Pasa, formerly inhabited by Greeks, Cumhuriyet (the former Cavuslu Ciftligi), Cavusbasi which grew up around a hunting lodge built by Yusuf Izzettin Pasa, Kilicli established during the time of Tamerlane’s invasion of Anatolia and Bozhane. The village of Polonezkoy was established by the Polish Adam Cartoriski in 1842 and is still home to a Polish community. Today Polonezkoy is famous for its cherries and pork products, and the inhabitants also make a living from running guest houses for the many city folks who come to enjoy the beautiful countryside. 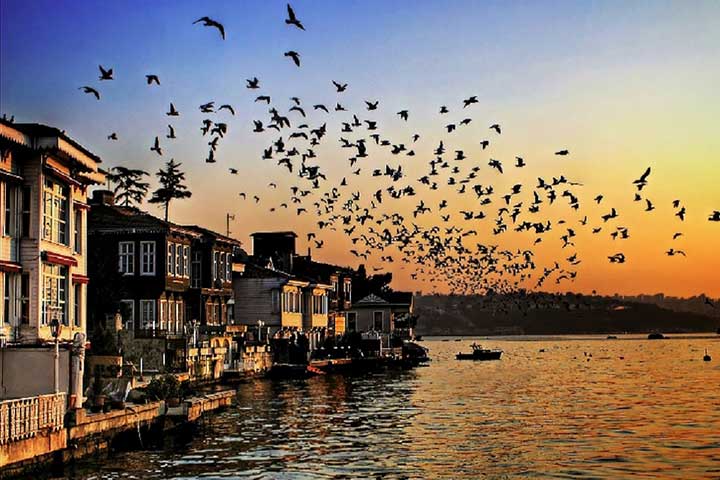 The woods and forests around this heaven are beautiful in every season. In spring and summer, the foliage is so thick that the sky is barely visible from the forest floor. There are several wooded parks in the area, such as Ibrahim Pasa Park, Saip Molla Park where the mansion of Hidiv Kasir stands, and the 50-acre Kasir Park. The village of Akbaba is a beautiful spot set deep in unspoiled woodland. The district is fortunate in having the Beykoz Trust, an organization devoted to protecting the district’s woodland and beauty spots for future generations to enjoy.

As well as its natural beauty, it has been home to many famous figures, such as Ahmed Midhat Efendi, who planted cherry and sour cherry orchards here and introduced new farming techniques such as incubators and modern beehives. It was he who first took water from the Sirmakes spring which rose on his estate to the city by boat. Journalist and writer Ali Suavi, Field-Marshal Fevzi Cakmak, the poetess Fitnat Hanim, and the poet Orhan Veli Kanik – whose house can still be seen – all lived in there.