A member of a noble family on his mother’s side, Strabo was born in 64 or 63 BC in the city of Amaseia (now called Amasya) capital of Pontus, a region in northeastern Anatolia that was an independent kingdom from the 4th century BC until overcome by Pompey in 66 BC. Pontus became a province of the Roman empire in 62 BC, shortly after Strabo’s birth. Coming as he did from a wealthy family, he was able to undergo a good education and he also had an opportunity to travel as the spirit-filled him. His ancestors had performed important duties for the former kings of Pontus and one of them was even elevated by Mithridates Eupator to the rank of the high priest, putting him second in authority to no one but the king himself. 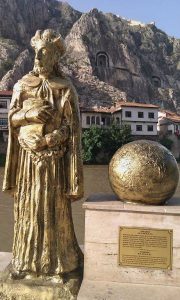 Attaching much importance to his education, he began studying at a very early age with Artemidoros in Nyssa (now Sultanhisar) near Tralles (Aydın) in the region of Caria (southwestern Anatolia). It is possible that owing to the strife with Rome, his family may have sent him to Nyssa in the hope that it would be a safer place for their young son than Amaseia. In 44 BC Strabo went to Rome, passing through Corinth on the way, to study under Publius Severus Isauricus, who died the same year. Now in Rome, the young man probably continued his studies with the Seleucid philosopher Xenarchos. In describing Amisos (Samsun) in his Geographika he tells us that he studied under Tyrannion, a geographer from that city. (Cicero also refers to Tyrannion as a distinguished geographer.) It is possible that he was influenced by this teacher of his to become a geographer himself. Among Strabo’s other teachers was the great Stoic philosopher, historian, and scholar Poseidonios. Strabo himself was an adherent to the principles of Stoic philosophy. Politically speaking, he was a staunch supporter of Roman imperialism and the respect and admiration he felt towards Roman and towards its leaders–particularly the emperors Augustus and Tiberius–is apparent in his work. He was also influenced by Pythodoris, queen of Pontus, who was so great a friend of Rome that she bequeathed her throne to Augustus and this also must have played a role in his partiality towards the empire.

Following his first visit to Rome in 44 BC, he returned to the city several times more (35 BC, 31 BC, 29 BC, and 7 AD). He spent much of his life traveling and noting what he saw, visiting Egypt, Ethiopia, and many other countries in the process. He likely spent the last twenty-six or twenty-seven years of his life in his birthplace Amaseia probably composing and refining his work. The earliest date for his death is put at 21. Having spent nearly thirty years in the fringes of the Roman world far from its hub, however, he was unable to keep track of day-to-day political events in Rome and thus his book is devoid of references to them.

According to some, the Geographika began to be composed in 7, when he was about fifty-seven years old. Others put the date of composition later in 18-19. H.L. Jones asserts that Strabo himself regarded his work as a sort of monument and no one would attempt to start producing such work at the ripe old age of eighty. He thus puts the writing at sometime around 7 when, at the age of fifty-seven, he would still have the mental and physical stamina necessary for such an undertaking. In my own opinion, however, 18 is a better choice as the date of composition because in volume XII (3.29) he makes mention of the death of Archelaos, the husband of Pythodoris. Archelaos died however in the early years of the reign of Tiberius (r 14-37), by which time the author would indeed have been around eighty. 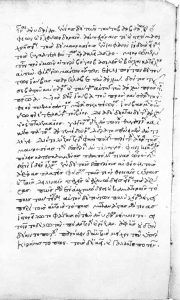 In his book, he proudly refers to his extensive travels and they were extensive indeed: as far east as Armenia in the east, as far west as the Tyrrhenian shores opposite Sardinia, as far north as the Pontus Euxinus (Black Sea), and as far south as Ethiopia. Also, Strabo tells us that among the geographers, no one had gone beyond these borders or traveled more than he had.

In his work, he not only provides us with information about the geography of Anatolia but he also gives a brief history of each region that he describes, thus making his work additionally important. Indeed, he appears to have been as much a historian as he was a geographer for among his works is a forty-seven volume work of history of which unfortunately nothing remains.

It is most likely that Strabo was little read in ancient times and he seems to have been essentially rediscovered during the Byzantine period. Very few copies of the work exist. The single manuscript which has survived and from which it appears all existing copies were made contains a horde of shortcomings and errors that were faithfully repeated in all the later versions.

The seventeen volumes of the Geographika provide information on the geography of the ancient world stretching from the Atlantic Ocean in the west to the Indus River in the east. Volumes I and II present a history of geography and earlier geographers. Volumes III-XI treat Spain, Gaul, Britain, Italy, Sicily, northern and southern Europe, the northern Balkans, Greece, the Black Sea, and the Caspian Sea. Volumes XI-XIV deal with Asia Minor (Anatolia) while volumes XVI-XVII cover India, Persia, Mesopotamia, Arabia, Egypt, Ethiopia, and North Africa.

The work is more than just a geography book, however: it is, in fact, a sort of encyclopedia of the ancient world at the turn of the millennium, historical geography, and–as some have put it–a “philosophy of geography”.

Now the distance from the headland that makes the strait only five stadia wide to the harbor which is called “Under the Fig-tree” is thirty-five stadia; and thence to the Horn of the Byzantines, five stadia. The Horn, which is close to the wall of the Byzantines, is a gulf that extends approximately towards the west for a distance of sixty stadia; it resembles a stag’s horn, for it is split into numerous gulfs–branches, as it were. The pelamydes rush into these gulfs and are easily caught–because of their numbers, the force of the current that drives them together, and the narrowness of the gulfs, because of the narrowness of the area, they are even caught by hand. Now, these fish are hatched in the marshes of Lake Maeotis, and when they have gained a little strength they rush out through the mouth of the lake in schools and move along the Asian shore as far as Trapezus and Pharnacia. It is here that the catching of the fish first takes place, though the catch is not considerable, for the fish have not yet grown to their normal size. But when they reach Sinope, they are mature enough for catching and salting. Yet when once they touch the Cyaneae and pass by these, the creatures take such fright at a certain white rock which projects from the Chalcedonian shore that they forthwith turn to the opposite shore. There they are caught by the current, and since at the same time the region is so formed by nature as to turn the current of the sea there to Byzantium and the Horn at Byzantium, they naturally are driven together thither and thus afford the Byzantines and the Roman people considerable revenue. But the Chalcedonians, though situated nearby, on the opposite shore, have no share in this abundance, because the pelamydes do not approach their harbors; hence the saying that Apollo, when the men who founded Byzantium at a time after the founding of Chalcedon by the Megarians consulted the oracle, ordered them to “make their settlement opposite the blind,” thus calling the Chalcedonians “blind”, because, although they sailed the regions in question at an earlier time, they failed to take possession of the country on the far side, with all its wealth, and chose the poorer country. I have now carried my description as far as Byzantium, because of a famous city, lying as it does very near to the mouth, marked a better-known limit to the coasting-voyage from the Ister. And above Byzantium is situated the tribe of the Astae, in whose territory is a city Calybe, where Philip the son of Amyntas settled the most villainous people of his kingdom.