Known as Markasi in earlier ages, Kahramanmaras, 78 km north of Gaziantep, stands as a site of history, having a long past filled with numerous invasions, was once the capital of Gurgum, a Hittite State in the 12th century BC. There exists an archaeological museum inside the citadel, where Hittite sculptures are on display. Other important remains in the area are the Ulu Mosque and the Tas Medrese, both dating back to the 15th century, together with the Hatuniye and Beyazit Mosques of the Ottoman period.

This province, the original name of which was Maras, had shown such valor during the War of Independence, that it was then given the title Kahraman, which means of "hero".

The specialty of the region is its famous ice cream well, and worth trying. Known as "Maras Dondurma" by Turks, is rather known as Turkish Ice Cream among visitors, is made of %7 pure goat milk, the tuber of orchids, powder and salep. The ice cream is now becoming pretty much global by getting exported to countries such as China, South Africa, USA, Maldives, and the Far East.

In the 12th century BC, Kahramanmaras was the capital of the Hittite state of Gurgum. A massive citadel built in the 2nd century BC houses the city's museum and its good collection of Hittite sculptures. Other sites include the 15th century Ulu Mosque and the Tas Medrese. 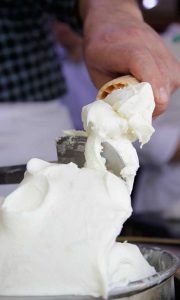 The ice-cream, thickened with gum arabic and beaten with a wooden paddle, is known throughout Turkey. Kahramanmaras has been known as the city of lions since ancient times. Called as Markasi in Assyrian sources, the city has been carrying the same name of the city for at least 1500 years. According to a rumor, the name comes from the word "mahris" which means month abscess or year abscess. It is the name given to a deep scar formed by the bite of a fly. As the excavations, done around the city, unearthed many Hittite works, the city is thought to be a Hittite settlement. It was the capital city of Gurgum state, which reigned after the Hittite Empire collapsed.

Being ruled by Assyrians, Persians, Romans, Byzantines, Arabs, Seljuks, Memlukians, and Dulkadirogullari successively, it became part of the Ottoman Empire in the first half of the seventeenth century. Named as Maras till 1973, it was donated the prefix Kahraman which means 'heroic' after the city resisted to French invasion under the leadership of Sutcu Imam. Maras Castle, situated on the hill in the center of the city, is thought to be built in the first and second centuries.

Tas Medrese, which dates from Dulkadirogullari, Tashan and the Grand Mosque, Haznedarli Mosque, which is thought to be built in the 15th century, the Mosque of Hatuniye and Iklime Hatun Medresesi are the historical works in the city. While in the plains, a kind of Mediterranian climate prevails, on the high plateaus and Elbistan Plain, land climate persists. The Economic life of the city mostly depends on cattle breeding. In 1968, it was included in the priority given cities in the process of industrialization but this did not have a pronounced effect on the economy, and the public and private industries established were the limited number of agricultural products.

Construction of the highways that connect the city to Kayseri, Gaziantep, Adana, and Iskenderun led to an increase in the population. Kahramanmaras is on the lands that have rich ores but mining industry still needs to be developed. There are ores of iron and lignite in Elbistan, aluminum, and iron in Goksun, manganese in Pazarcik, barite in Turkoglu which awaits to be processed more efficiently.