Turkish Coffee (Turkish: Turk Kahvesi) is now included in the list of Intangible Cultural Heritage of Turks by UNESCO.

The issue was decided at the UNESCO committee’s session in Baku on 5th December 2013. Around 800 delegates from 116 countries took part in the sitting, which included the discussions on 38 proposals and the proposal for including this historical beverage in the List of Immaterial Cultural Heritage and then an overwhelming majority approved it. Before, some other assets of Turkey’s culture were included in the UNESCO Intangible Cultural Heritage List, including grease wrestling in Kirkpinar and Turkey’s Traditional Shadow Theater Hacivat and Karagoz, etc.

Turkey is also preparing to propose the inclusion of the “Ebru Art” water surface painting into UNESCO’s List of Intangible Cultural Heritage.

Turkey and coffee are so closely linked that visitors are often surprised to learn that it is not, and never has been, widely cultivated here. It is the preparation and drinking of coffee that became an art form in Turkey and spread first with the Ottoman Empire across many parts of the world.

The word coffee comes from the Turkish “kahve” which is in turn derived from the Arabic “kahwa”. The beans originally came from Arabia, Egypt and India, and their first use was as a sandwich spread. There are different versions of the story of the introduction of coffee to Turkey but it occurred in the 16th century. When the first coffee house opened in Istanbul, it was strongly opposed by the religious leaders who considered coffee to be so dangerous that they declared it sinful and banned it. It is not harmful to health when taken in moderation and it aids digestion, taken in excess it is a stimulant.

Despite, or perhaps because of, the objections of the clergy, within a very short time, the number of traditional coffeehouses had increased in Istanbul alone to over 600. The coffee houses were with gentlemen clubs with fine views, pavilions, and pools where men could relax, smoke their pipes, listen to music and discuss politics.

Unlike coffee itself, the time spent on the ritual of coffee making did not survive export to Europe and the percolated, filter and instant coffee variations that were developed there subsequently found their way back to Turkey where all are now available. Despite these incursions, real Turkish Coffee remains an important part of the culture and is surrounded by its special equipment and ceremonies.

How Sweet Should It Be

When serving a large group, it is best to prepare it as semi-sweet.

How to Make Turkish Coffee

Below is the equipment, coffee choice, and process to make amazing Turkish Coffee:

First, You must Start with the Right Equipment

A copper pot, called “cezve” (pronounced “ jezz-va” ), is made of copper. Copper is an efficient conductor of heat so less flame is needed to produce ideal temperature. Want to learn more about the pot, read here. 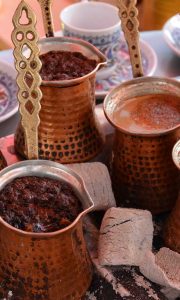 Thin-walled 3 oz porcelain cups, with straight sides. These traditional cups ensure your coffee stays hot while sipping. Espresso cups are two thick your brew and are better used when you dream of Italy.

A spoon to stir and sugar if desired. If you use sugar, it is added before and not after the brewing process. Sugar in the raw is often the preference here.

Coffee that has been ground to a fine powder. Your coffee pot must be the right size in proportion to your brew.

Ultimately, the type of coffee you use is a personal preference but it should be a light or medium roast.

The fine, flour-like grind helps to create its distinctive flavor.

There are 2 easy ways you can grind the coffee.

The easiest way is to purchase a grinder. The second option, grind at your local grocery store; most have a Turkish Coffee setting but it may take 2twice through the machine to get the desired consistency.

Typical grinders do not produce a fine enough produce due to a difference in blades.

Another reason for the distinct flavor is the brewing process.

Coffee loses the complexity of its flavor within a week of roasting. In Turkish Coffee, you are re-roasting the coffee during the brewing process which pulls out the beauty of its flavor.

Turkish Coffee is not filtered which aids in the re-roasting process and the water is not preheated as is the case in other types of coffee.

Following these “rules” is important to ensuring an authentic cup of coffee.

Now that You Have all the Ingredients and the Equipment. Here is the Step by Step Instructions.

We hope that you found these instructions helpful, however, we believe that the best way to learn how to make Turkish Coffee is to learn in Turkey. Contact us to arrange a romantic getaway, a wedding, or just an amazing trip. Our experienced agents will contact you to arrange a never to forget trip.

*If you want to learn more about the history and why we Turks are so passionate about drinking coffee; you can also visit Kuru Kahveci Mehmet Efendi and Mahdumlari website.

As the Turks say traditionally: “To drink one cup of coffee together guarantees forty years of friendship.”