If Nasreddin Hodja was a real person, he lived in 13th century Turkey in and around Aksehir in the Konya area. In his time he was an imam (a religious leader), a judge and a professor in a medrese (Islamic college). But whether he was real or not Nasreddin Hodja embodied the folk wisdom of his time and has continued to do so over the centuries. The themes of the Nasreddin Hodja stories are universal and timeless covering social and interpersonal relationships and raising questions about relationships between people, animals, and the natural world.

The stories are still told as far away as Siberia and North Africa and have been translated into many languages. New stories emerge, and old ones are adapted, to fulfill the needs of each new generation. 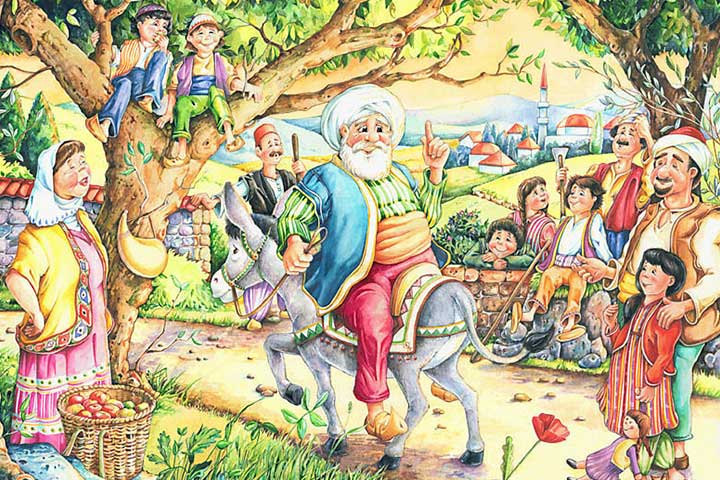 So popular, in every sense, are these stories, that many of the “punch lines” have become epigrams.
Here are just a few examples:

I WILL KNOW WHAT TO DO

Hodja lost his saddlebag in the town where he had stopped to spend the night. “You either find my saddlebag or I’ll know what to do.” he said to the peasants in town. The peasants were alarmed and they looked for it everywhere They finally found Hodja`s saddlebag and returned it to him. Just before Hodja left the town, the peasants asked: “What would you have done if we hadn’t found it?” Hodja shrugged his shoulders and said “I have an old kilim at home. I was going to cut it up and make another saddlebag with it.”

An Iranian gave Hodja a letter he had received from a friend back home and asked Hodja to read it to him. Hodja looked at the letter. It was in Persian and the handwriting was terrible so he told the man “Have somebody else read it. “The man insisted. “Listen” said Hodja “I don’t know Persian. Even if it were in Turkish, the writing is so bad that I still wouldn’t be able to read it!” The Iranian got mad, “You are wearing a huge robe and a turban but can’t read even a simple letter. You should be ashamed of yourself!” Hodja took off the turban and the robe and gave them to the Iranian saying “If one can do everything by wearing a robe and a turban then here you can wear them and read the letter yourself!”

Hodja had an ox with horns shaped like a bow. He had always wanted to sit between the horns and ride the ox but he was too afraid. One day he saw the ox sleeping, he approached it quietly and managed to sit between the horns but the animal was startled, it shook itself and threw Hodja to the ground. He fell on his head and was knocked out. When his wife saw him lying on the ground motionless she thought he was dead and began to cry. Soon Hodja opened his eyes again and consoled his wife saying “Don’t cry my dear, I tried hard and I got badly hurt but I finally did what I’d always wanted to do!”

Hodja had two wives and, because they were jealous of each other they used to fight quite often. To put an end to the fighting Hodja gave each one a blue bead and said: “Now don’t tell the other one that I have given you this bead which is a symbol of my love for you.” One day they were fighting again. They asked Hodja whom he loved the best. He answered calmly “I love the one who has the blue bead.” Each wife then thought Hodja loved her the best and they never bothered him again.

The annual Nasreddin Hoca festival is held in Aksehir, the site of his tomb, every year between July 5th and 10th.