Antalya is the heart of Turkish tourism, and Kaleici is the old town inside the city’s fortifications and consists of a maze of streets lined with old houses. When I got out of the car and headed for Kaleici I had planned to stay just a few hours, and could never have foreseen that I would spend eight days wandering its streets. It was like exploring a miniature country. Here were the houses of Safranbolu and Mugla, the doors of Ayvalik and Bergama, and the narrow lanes of Cumalikizik; the Grand Bazaar of Istanbul with its shops selling kilims and carpets or silk pashminas from as far afield as Van, and even the rag dolls of Cappadocia. Here were the nomadic hair tents which I had seen on Mount Kucuk Nemrut, with women weaving carpets inside them, and the ancient walls, churches, mosques, medreses, hans, and hamams dating variously from the Roman, Byzantine, Seljuk, and Ottoman periods as seen in many parts of Anatolia.

How could I ever have thought that a few hours would suffice? There was the old harbor, now a marina, encircled by the city walls. The harbor scene looked quite different by morning and by evening, each as beautiful as the other, with the light slowly flashing at the end of the breakwater, the sailing boats of all shapes and sizes, and the palm trees and date palms along the waterfront. It is no wonder that King Attalos II of Pergamum declared this spot to be heaven on earth when he first came here.

The Ancient City of Attaleia

The story goes that around two thousand years ago King Attalos sent a vanguard out into the world with the order, ‘Find a place that should be the envy of all kings and princes, a place to draw all eyes. Discover a paradise for me.’ When they came to the place where the city stands today, it was so beautiful that they realized they had found the paradise of which the king had spoken, and sent a messenger back to inform him. When Attalos arrived, he immediately commanded that a city is founded here, to be called Attaleia after himself. The city changed hands over the centuries, but the name remained. Under the Seljuk Turks, who first took the city in 1085 and permanently in the early 13th century, it was variously called Stelai, Satalya, Adalya and finally Antalya as also called today. 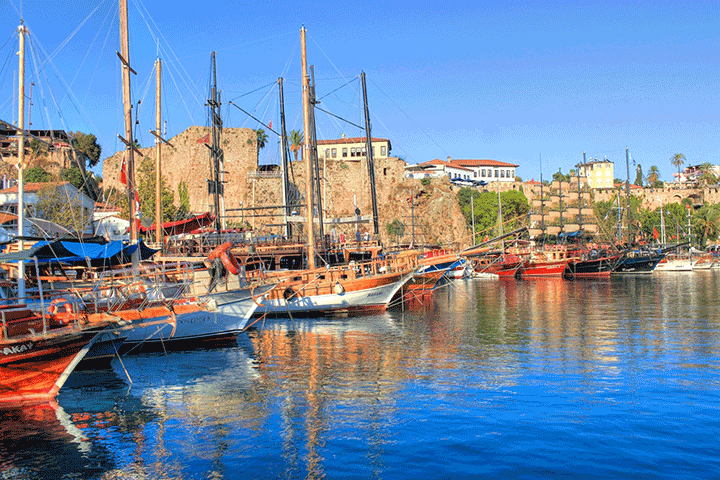 It is the site of the ancient city of Attaleia, making it one of the oldest inhabited cities in Turkey. Structures dating from the Romans, Byzantines, Seljuks, and Ottomans are still standing in the old town, which has an area of 35 hectares and consists of four neighborhoods, Selcuk, Tuzcular, Barbaros, and Kilicarslan. Both sea and land walls were built right around the city, for protection against pirates in particular, and subsequently, the second wall with towers and turrets was built as the city grew larger. It is this second wall which now encloses the old quarter of the city, and around which the main streets of the modern run.

In these narrow shaded streets, even the blazing heat of the noon sun is muted. Large or small, every house has a garden surrounded by high stone walls, over which hang branches of orange, bitter orange, lemon, plum and wild apricot trees and palm fronds. Great wooden gates, usually double, lead into the courtyard, around which are vegetables and flowers as well as fruit trees. These courtyards are the most important part of traditional houses. In hot weather, the occupants wash them down with water, which collects between the pebbles and cools the air as it evaporates. From the courtyard a staircase leads up to the hayat, a broad balcony off which the rooms open. In the past, the word for the room was ev (house) and indeed each room was designed like a self-contained dwelling, the largest belonging to the master of the house. 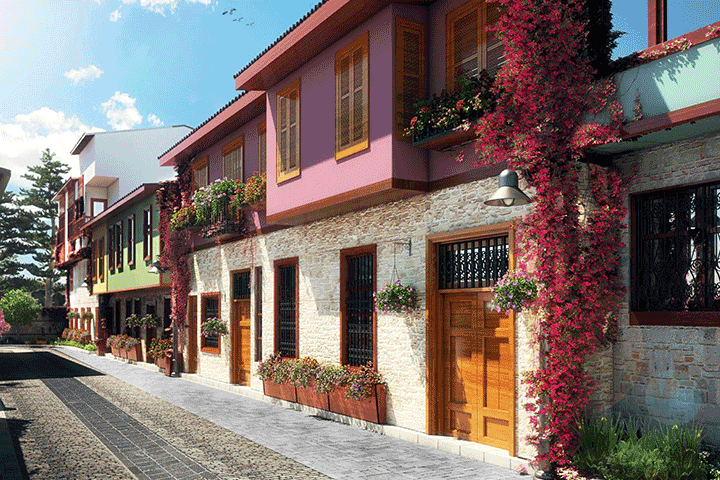 Around the walls of each room were shelves about two meters from the floor. The rooms on the ground storey had low ceilings, but those on the upper storeys were up to 4 meters in height, enabling the movement of air to keep the rooms cool in this hot climate. One day I was invited into a house near the Oscar Cinema by Atiye Hanim, who had seen me from the window as I looked at the old houses. Atiye Hanim had lived in this house ever since her marriage, and her elderly mother had lived here all her life. I followed her through the door, across the courtyard, and up the stairs into a pretty sitting-room with the original decorated ceiling. The house had been restored, and she was proud of having retained most of its original features. As we sipped our coffee in the kitchen, I admired the blossom on the tree beyond the window and breathed in its fragrance. Although images can be photographed there is regretfully no way to preserve scents.

Some of the houses have been restored and others are awaiting their turn. Passing old deserted houses I imagined how it would be to look through the courtyard gate and see freshly washed pebbles, wells in working order, crisp white curtains, and windows framing carnations and geraniums. This dream is shared by the Antalya Kaleici Association (ANKAD), which was founded a year ago to restore the abandoned and derelict houses of the area. When I met the chairman of the association Murat Erdogan and some of the members, they told me about their plans and projects. As more people lend their support to their work, it will not be so long before all of Kaleici is rescued for posterity.