Grandiose Imperial Mosque Suleymaniye was a complex of social and religious buildings consisting of four medrese (madrasa: theology school), Medical Medrese, Hadith Medrese, Quran School, primary school, a hospital, tabhane (house of rest for the sick and needy), soup kitchen, bath, caravanserai (inn for the travelers), shops and tombs. It is the largest kulliye (complex of religious and public buildings adjacent to a mosque) of the Ottoman Empire and has been built as one of the largest construction area organizations. Suleymaniye Kulliye which was designed as a high education site by combining caravanserai-soup kitchen-bath trio of rural kulliye and medrese-hospital institutions of urban kulliye in one large complex around a grand mosque has created an advanced level of multipurpose kulliye.

It is the symbol of the zenith of Ottoman Empire being a masterpiece of the best architect, built during the reign of the most powerful Sultan. The Hassa Architects’ Guild, conscript boys, sultan's household troops and paid masters, workers and galley slaves worked in the construction. In a typical summer day, the average number of the workers was 2000. The honor of opening the edifice was granted to Architect Sinan by Sultan Suleyman the Magnificent.

Building materials were brought from all over the country. Additionally, columns and other architectural elements were transported mostly from Egypt, Baalbek, Silifke (former Seleucia ad Calycadnum) and Alanya (Alaiyye) also from the ancient cities of Anatolia and Thrace.

Kulliye is constructed on terraced slopes in the garden of the first Ottoman structure in the city, what is later known as the “Old Palace” located on the current site of Istanbul University. The structures are positioned in a symmetrical order on fillings and additional layers to level the soil, taking the virgin ground of the mosque and the tombs as the base level.

The mosque is the dominant structure of the kulliye and is an important phase in the development of Ottoman mosque architecture. It is a masterpiece showing the classical Ottoman style and artistic techniques in the most glorious way. However, the plan resembles that of Hagia Sophia's plan, the space formation is quite different in the Suleymaniye Mosque. It is an artifact that is the ultimate end product of the achievements in the building techniques and the traditional mosque architecture in the 16th century. The mosque is a building where the structural elements carrying the central dome coalesce with the periphery of the mosque while Hagia Sophia is an inspiring domed basilica. The screenings of the rows of columns that divide the central and lateral naves in Hagia Sophia have been removed in Suleymaniye and instead, space has been extended towards the side naves to maintain the completeness. The load of the dome has been distributed to the main supporting system that is composed of four suspension arches together with the semi-domes and the adjacent arches. The interior of the mosque was illuminated abundantly owing to this system which provided the space with numerous windows. 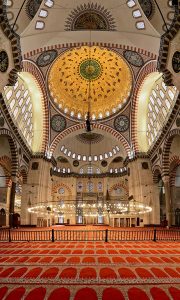 The transition between the main nave and the side naves is provided by one large and two smaller arches. The same rhythm is seen on the exterior of the structure and in the domes above the side naves. At the sides of the building, the top of the arches that carry the dome end in steps. The areas between the arches are screened with window perforated walls. Below this level, the domes of the side naves are in the order of one small one large. This whole separation into graded ranks gives the external mass of the mosque the form of a pyramid. Buttresses that support the dome flow down in steps and arcades between their bases are two-storied and fringed on the sides of the building. The outdoor arcade design that has begun with the Sehzade Mosque has always been applied in the mosques after Architect Sinan.

Another method used in the Suleymaniye Mosque is the draining technique. The weight carrying ability of soil weakens in an earthquake due to seismic and underground water movements and loses its supporting power which is called liquefaction. When liquefaction of ground occurs, the building above sinks into the swamp. That is why water insulation and drainage of the foundation of a building is important. In the 1950s, during the nationalization of the location of today's Istanbul Commerce University, pipes for draining rainwater or for sewer system were discovered connecting to Golden Horn. Researchers around Suleymaniye Mosque have revealed that a pipe system was connected to the pebble-sand wells under the foundation of the mosque to drain water off the hill where the building sits on. As clay soil holds water instead of draining, this pebble-sand drainage system has been used against the ground resistance weakening, which is applied only in the last half a century by the contemporary civil engineers. By this drying system, the building is protected from water and humidity in the foundation and therefore cracking have been prevented as no settling in the structure occurs. Architect Sinan also has used air ducts to take the humidity out and balance warm and cold air inside the building. Other than these, he has also built release ducts and has connected them to the main drainage system to avoid vapor from penetrating the foundation of the building when water and soil warm up in summer. Inside the mosque, the air draft profile was kept as close to zero as possible 20 cm. from the floor to keep feet warm and so as to gain speed on the higher levels. Architect Sinan has chosen dome as the covering element of the mosque for the sake of acoustics too, which is the most advantageous form of structure to amplify sound. He has built all the domes double layered and has created the palatine vault. For audio improvement, he has fitted 64 empty earthenware jars of 50 cm. at the corners and at the base of the dome as a precaution to the resonator effect of the dome and possible sonic booms. Additionally, he has left gaps in the floor for reflection of sound. Thus, Suleymaniye Mosque has had the perfect acoustics.

The main portal of the mosque is an important geometrical center. Fume chamber is another geometrical center which collects the fume from the oil lamps inside and transforms into ink, is a cyclone-chimney system functioning entirely by natural air conditioning.

The third geometrical center is the fountain (used for ritual ablutions) in the mosque courtyard. It is the first drinking water station in the history which purified water using oxygen in the air draft that is created by using the natural tower system. The water was carried from Mt. Istranca streams partially by Byzantine aqueducts. The circles referred to by the crescent of the outer minaret and fume chamber dome points a diminishing sinusoid. It was discovered that 9 different fixed angles have been used for the structure which added up to 273.15 degrees. Likewise, the distance from the main portal to the service buildings is 273.15 meters. Some lengths and angles such as the height of the minarets and the diameter of the dome, when proportioned, give the well-known indexes like “pi” and 1.6 (golden ratio) and also numbers 23 (degree of Earth's tilt), 4.18 (calorie/joule conversion index) and “e” in the logarithm.

Suleymaniye Mosque is a perfectly balanced isosceles triangle with base angles 66 degrees like the Egyptian pyramids. It has been confirmed that the fume chamber is located at the center of gravity at the 1/3rds of the height of the structure from the base, just like the tomb chambers in the Egyptian pyramids.