A rare palace that still stands...

Ishak Pasha Palace is more of a complex than a mere place. It is our second administrative campus after the Topkapi Palace in Istanbul and the most famous of the palaces built in recent decades.

The palace which was built on a hill at the side of a mountain 5 km east of Dogubeyazit district is the last large monumental structure of the Ottoman Empire in the (Tulip Era) Lale Devri period. It is one of the most distinguished and magnificent examples of the 18th century Ottoman architecture and is very valuable in terms of art history. According to the top of the door inscription at the Harem Section, it was constructed in 1784 or 1199 according to the Islamic calendar.

As the ground building sits on is a valley slope, it is rocky and hard. Despite the fact that it is at the center of the Old Beyazit city its three sides (north, west, south) are steep and sloped. There is a suitable flat area only to the east. The entrance to the palace is on that side. It is also its narrowest facade.

As the palace was built in an age when the castles ceased to be special and firearms were developed and were abundantly available its defense towards the hills on the east is weak. Its main gate is the weakest point in that respect. The structure of the main gate is no different than those seen in the palaces built in İstanbul and elsewhere in Anatolia and has neat stone workmanship and carving.

Today, we have very few examples of the historical Turkish palaces still surviving. One of these is the Ishak Pasha Palace and complex.

Ishak Pasha Palace is composed of following sections in terms of architectural style: 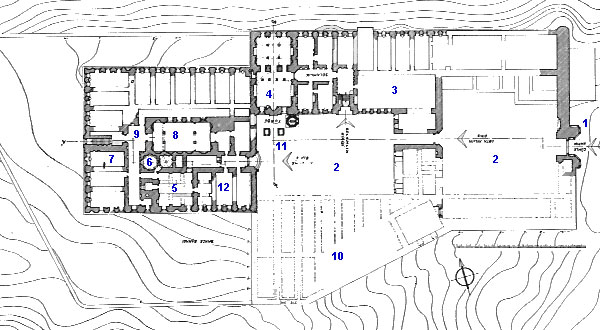 The characteristic of the palace is in its mixture of Ottoman, Persian, and Seljuk architectural styles. The palace was built in 1685 by Ishakpasha II of the Cildirogullari and Colak Abdi Pasa and took its final form in 1784. The building occupies an area of approximately 115 x 50 m². The portal on the eastern facade of the palace, which is built with cut stones, reflects the characteristics of the Seljuk art with its reliefs and decorations. 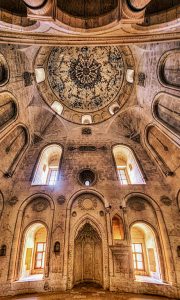 The palace is composed of two courts and the collection of structures positioned around them. Some of the buildings of the first court are destroyed. The second court which is surrounded on four sides by buildings has a rectangular plan. To the right, with reference to the entrance there is the men's quarter and behind it the harem section. At the end of these, there is the mosque and the mausoleum. The mausoleum is built in the style of the Seljuk kumbet (cupola) architecture. The Palace section has two storeys. All of its 366 rooms are arranged on these two floors. Each room has a stone fireplace. The cavities within the stone walls indicate that the building as a whole possessed a central heating system. The reception hall is 30 x 3 m². It has stone walls and floor. Its walls are decorated with couplets and verses from the Koran in the decorative examples of the Turkish Calligraphy art. Among these, a couplet, which is very free translation goes like Ishak, upon the will, made the whole world a place of benevolence and the date to witness this was one thousand one hundred ninety-nine and indicates that the palace was completed in 1784 AD. The mausoleum in the second courtyard of the palace is built with cut stones This octagonal mausoleum is in the shape of the copulas, which is one of the most typical examples of the traditional Seljuk mausoleum architecture and has two storeys. Its walls are decorated with geometric motifs. Colak Abdi Pasa, Ishak Pasha, and their close kin are resting at this mausoleum.

The interior and exterior architectural wealth of the palace could be described forever. Whether the palace is taken as a whole or should its rooms and buildings studied individually, success, order, and mastery are all that one can find.

Ishak Pasha Palace stands at a desolate valley today and the fact that it was the subject of various legends and stories add to its magnificent atmosphere some color and mystery.