Located on the upper Tigris basin, at the junction of historical trade routes connecting Anatolia to Iran and Mesopotamia, Diyarbakir, surrounded by walls, has been an important settlement for many centuries.

Starting from the earliest times, the city was ruled by the Hurri-Mithani, Hittites, and Assyrians. It was once the capital city of the Arami Bit-Zamani Kingdom. It was later occupied or ruled by the Meds, Pers, Macedonians, Selevkos, Parts, Romans, the Ilkhanide and the Akkoyunlu. It is referred to as Amidi, Amid, Amido or Amida in different sources. In Islamic-Arabic sources it is cited as Diyar-i Berk. In the Republican era, it is started to be known as Diyarbakir deriving from the copper ore existing in the area. 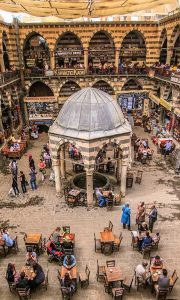 The province has a territory of 15.355 square kilometers. Dry farming and fallow are practiced over most of its culture land. The population is 1.282.678, living in 13 districts (including the central town) and 734 villages. Its administrative districts are Bismil, Cermik, Cinar, Cungus, Dicle, Edil, Ergani, Hani, Hazro, Kocakoy, Kulp, Lice, and Silvan.

It is the second most populated city in Southeastern Anatolia. It is made up of "old" and "new" sections. The "old" section is surrounded by walls. Having four main gates, these walls are the grandest and the most solid of all such structures existing in Anatolia. The important historical structures remain in this part of the city. The "new" section out of the walls developed under a plan in the Republican period. It gives a sharp contrast to the old section with its orderly avenues, independent dwellings, parks, official buildings, and big hotels. The most important stream in the province is the Tigris.

It is located in a transition zone connecting the mountainous northern areas and the plains of Mesopotamia. It is presently at the center of the highway network connecting other important settlements of the region such as Elazig, Mardin, Sanliurfa, and Bitlis. The railway reached the city center in 1935 and was later extended to Kurtalan out of the territory of the province. Diyarbakir has air connections to the big city centers of Turkey.

Despite its present status of dependency on crop farming and stock breeding, Diyarbakir has considerable potential for other investment ventures and presently it is the second industrial center of the region after Gaziantep. It has an organized site for small enterprises. It is one of the provinces accorded priority in development. The province is now moving to concentrate on feed and meat production, which increased capacity for marketing while maintaining its traditional branches of industry.

The most famous structure which witness to the rich historical heritage of Diyarbakir is its fortress. This fortress located on a solid rock called "Fis" 100 meters high from the Tigris is believed to be built by the Hurri. The Citadel has a domed basilica (a Nestorian Church from the 6th century), a mosque, Sahabeler tomb, an Artuklu Palace and some old official buildings. The walls are the longest in the world after the Chinese Wall. One can trace back 12 different civilizations from inscriptions on these massive and solid walls. The original builder is not known. The walls are extended and consolidated by the Roman Emperor Constantinus in 349 AD. The four main gates open to four main directions. Having a length of 5 kilometers, the walls are 12 meters high, 3-5 meters wide and have 82 watchtowers.

The house where Cahit Sitki Taranci, one of the most celebrated poets of the Republican period was born was turned into a museum in 1973. The museum exhibits the photographs and personal articles of the poet as well as some ethnographic pieces obtained from the area. The house bears the characteristic features of local architecture.

It was built by Husrev Pasa in 1527 and also known by his name. It is a two-part structure, a two storey main part, and a stable. The local people call it deliler (guides) since guides who took pilgrims from various locations to Mecca each year used to gather here. The remains existing just across the inn are also attributed to pilgrims. The Inn was restored and turned into a modern hotel with a capacity of 120 beds.

The bridge is near Silvan, a district of the city, on Diyarbakir-Batman provincial border. It is a magnificent Artuklu piece which witnessed so many events. It has the widest arch width among all arch bridges in the world. It connects two banks of the stream not on a straight but broken line. Evliya Celebi, a well known Ottoman traveler says the following about the bridge: The bridge has iron gates on both sides. There are hostels in these gates, to the right and to the left, and also under the arch. While some chat, others fish by throwing their nets down to the Batman Brook. The inscription on the bridge gives the date of construction as 1147-1148. The inscription also reveals that the bridge was built by Timurtas, the ruler of the Artuklu in Mardin.

It is one of the oldest mosques in Turkey. It is known that the Church of Saint Thomas was gradually converted into a mosque. It is a grand and impressive structure, built of cut stone over an area of 80 x 80 meters. The minaret of the mosque is rectangular. Its fountain (1849), carved marbles and niche are all important artworks. The walls of the mosque are also ornamented with reliefs and carvings. The minaret and the gate bear 20 inscriptions dating back to various periods in history. The tombs in the yard were destroyed by the Persian King Ismail in 1507.

Jewelry, silk processing, Coppersmith works, pottery, leather works, felt making, textiles, embroidery and carpet making are the leading handicrafts. Among them, jewelry is still important. Mat bracelets, coriander, necklaces, and silver ornamented wooden shoes are the special works of the province. Sericulture is practiced at the city center and in the districts of Kulp, Silvan, and Lice. However, silk production is in decline. Textiles which lived its golden age in the 40s now survive only in small workshops.