On my way to the Georgian border at the far eastern end of Turkey to film a documentary, my curiosity was aroused by the sentimental reaction to the name Macahel. I did not meet a single person from the province of Artvin whose eyes did not light up when I informed them that we were on our way there, and in the other Eastern Black Sea provinces, too, the name has a strange magnetism. Macahel is the name of an area, to be more exact a valley, in the district of Borcka in Artvin. When a local person explains the meaning of the name they inevitably begin by holding out their left hand and place their right index finger on the left wrist, because ‘maca’ means ‘wrist’ in Georgian, and ‘hel’ means ‘hand’. The village of Camili has always been the main village, ie. the wrist, in the area, and the other five villages represent the fingers of the hand. Whereas in other parts of the world the struggle is to protect nature from mankind, here in this border region nature has always reigned supreme; so much so that people have had difficulty making a living here, and over the past 30 years the population has plunged from over seven thousand to around one thousand three hundred. 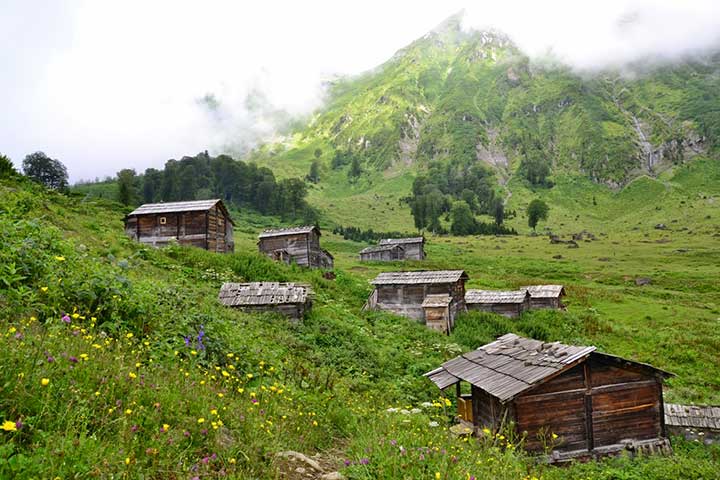 There are two borders in Macahel: one the political boundary between Turkey and Georgia (here I should remind readers that since this is a military frontier region, permission to visit Macahel must be obtained from both the military and government authorities); and the other the natural boundary formed by the Karcal Mountains. With the first snowfall of winter in these mountains, the road between the valley and the town of Borcka becomes impassable, and the inhabitants of the valley are cut off from the rest of civilization for at least six months every year.

After the Ottoman-Russian War of 1877-8, the region changed hands several times, and in 1921 a referendum was held, as a result of which twelve of the eighteen villages in the valley chose to become part of Georgia, while six remained part of Turkey. The town of Borcka thus became their only door onto the world, but the towering Karcal Mountains have done their utmost to obstruct even this tenuous link. For years, the people of the Macahel Valley either walked or rode to Borcka, but in the winter the deep snow on the mountains made this impossible, and the inhabitants were imprisoned in their valley. The year 1991 might be described as the year that the sullen frown of the Karcal turned to a smile, as the collapse of the Soviet Union brought changes that deeply affected life in Macahel. Regulations on crossing the frontier were relaxed, allowing people on the Turkish side who fell sick in winter to travel via Batum. Meanwhile, it also became possible for the people of Turkey to explore Macahel, and the scientists who first made use of this opportunity found a natural treasure house of plants and animals endemic to the region. The valley was declared a nature reserve as a result of these discoveries, one of which was the Caucasian bee. Owing to strict military control over the valley, no bees of other species had been introduced to Macahel, and the local variety was found to have retained its original genetic characteristics.

Although the Caucasian bee occurs elsewhere in eastern Turkey, only here is it genetically pure. Superb honey is collected from the natural nests of these bees, but the difficulties of transportation have prevented sales from reaching anything like their true potential. The matter was taken up by forestry engineer Associate Professor Dr. Yucel Caglar, a member of the Rural Environmental and Forestry Problems Research Society, together with numerous other scientists, non-governmental organisations, and local people, and in 1998 studies revealed that all the colonies of bees in the Macahel Valley were the pure Caucasian species, which has one of the highest honey output levels of any bee in the world. It was calculated that by the proliferation of colonies of these bees, honey production in Turkey could be multiplied several folds within a short time, making Turkey a leading honey producer. On the basis of these findings, an ambitious rural development project was launched to spread beekeeping among the local people, whose economic mainstay until then had been forestry. This would raise local income while simultaneously conserving the natural environment of the valley. The next step would be to encourage eco-agriculture and eco-tourism, so opening up economic opportunities for the local population. Nihat Gokyigit, an Artvin businessman and vice-president of the Turkish Erosion Prevention Society, is the sponsor of the Macahel Environmental Conservation for Rural Development Project.

Today, large numbers of queen bees are being bred in Macahel and distributed all over the country. One queen bee introduced into a colony completely changes the genetic character of the colony within one and a half to two months. For an apiarist, this means increasing honey production several folds in a very short time, so demand for Caucasian queen bees is high. However, additional financial and technical support is still needed to assist more local people to take up apiculture, and the provincial governor’s department and several other government organizations are making energetic efforts in this direction. In short, the Caucasian bee is triumphing over two major obstacles: one the mistaken belief in Turkey that economic development and environmental conservation are irreconcilable, and the other the Karcal Mountains.