Although the establishment date of Hierapolis antique city which is located right beside Pamukkale won fame with its white travertine, is based on the known sources dating the city back to 3rd century BC, newly found Mother Goddess cult as a result of recent archaeological digs proves inhabitants around the begin of the first millennium BC. Hierapolis, known as a holy city during the late period where the tomb of St. Philippus is located, is believed to be named after Hiera, mythological queen of Amazons lived in Anatolia. 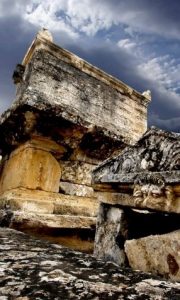 Before anything else, this has been the gate to the underground world, to the world of the dead. A fatal gas, leaking from a deep slit which kills anyone breathing, has been linked with the underworld Gods and was named as Plutonium. It was believed that a river called Styx was separating our world from the underworld and the help of Charon, a boatman, was needed to get across the river. However, Charon’s service was not free, and that’s why gold coins were placed in between the teeth or in the eyes of the dead for that they can pay for their last travel. Kerberos, on the other hand, was the guard dog of the underworld.

According to The Roman Historian Strabo, who personally came to see the Plutonium; the leaking gas was so intense that it was impossible to see the ground as the fatal gas entirely would cover it. Bulls let down the hole to be sacrificed to these Gods were immediately tumbling down as they feel the breath of the gods of death- the deadly gas.

However, only the priests of the Mother Goddess Cybele had immunity against this gas. With their long French braid hair which well-match with their long cloaks and silver rings completed with their tattoos covering their body, those priests were castrating themselves for the Goddess who was believed to be the very source of this immunity. By getting down to the deadly hole where no creature could survive, those priests were proving their immunity stemming from the Mother Goddess.